Since computers are increasingly being used in all aspects of daily life, it would be of great advantage if we could communicate with them the same way we would interact with other people. The field of affective interfaces is working towards making computers more accessible by giving them natural-language abilities, including using synthesized speech, facial expressions, and virtual body motions. Such virtual characters often have adult bodies. An adult interface agent usually leads users to expect advanced communicational and social skills. Since computer social skills are still under-developed, users tend to be rather intolerant towards such an agent and find them less likable and appealing. This talk will discuss the challenges of creating an agent with human-like communicational and social skills to thereby raise the acceptance towards virtual avatars.

Since the times of the Lumière brothers, the way we watch movies hasn’t fundamentally changed: whether in movie theaters, on mobile devices, or on TV at home, we still experience movies as outside observers, watching the action through a “peephole” whose size is defined by the angular extent of the screen. As soon as we look away from the screen or turn  around, we are immediately reminded that we are only “voyeurs”. With full field-of-view, head-mounted and tracked displays available now on the consumer market, this outside-observer paradigm of visual entertainment is giving way to a fully immersive experience that encompasses the viewer and is able to draw us in much more than was possible before.

Current endeavors towards immersive visual entertainment, however, are still almost entirely based on 3D graphics-generated content, limiting application scenarios to virtual worlds only. The reason is that in order to provide for stereo vision and ego-motion parallax, which are essential for genuine visual immersion perception, the scene must be rendered in real-time from arbitrary vantage points. While this can be easily accomplished for 3D graphics via standard GPU rendering, it is not at all straight-forward to do the same from conventional video footage acquired of real-world events.

This thesis documents the development of a software framework for conducting psychophysical experiments using the dome projection system of the Computer Graphics Lab at the TU Braunschweig (ICG Dome).
The framework adapts the approaches of existing software designed for conventional flat displays to this new immersive environment.

The thesis describes the functionality of the framework and explains the process of building an experiment using an example.
Finally it discusses the suitability of the ICG Dome for psychophysical experimentation. 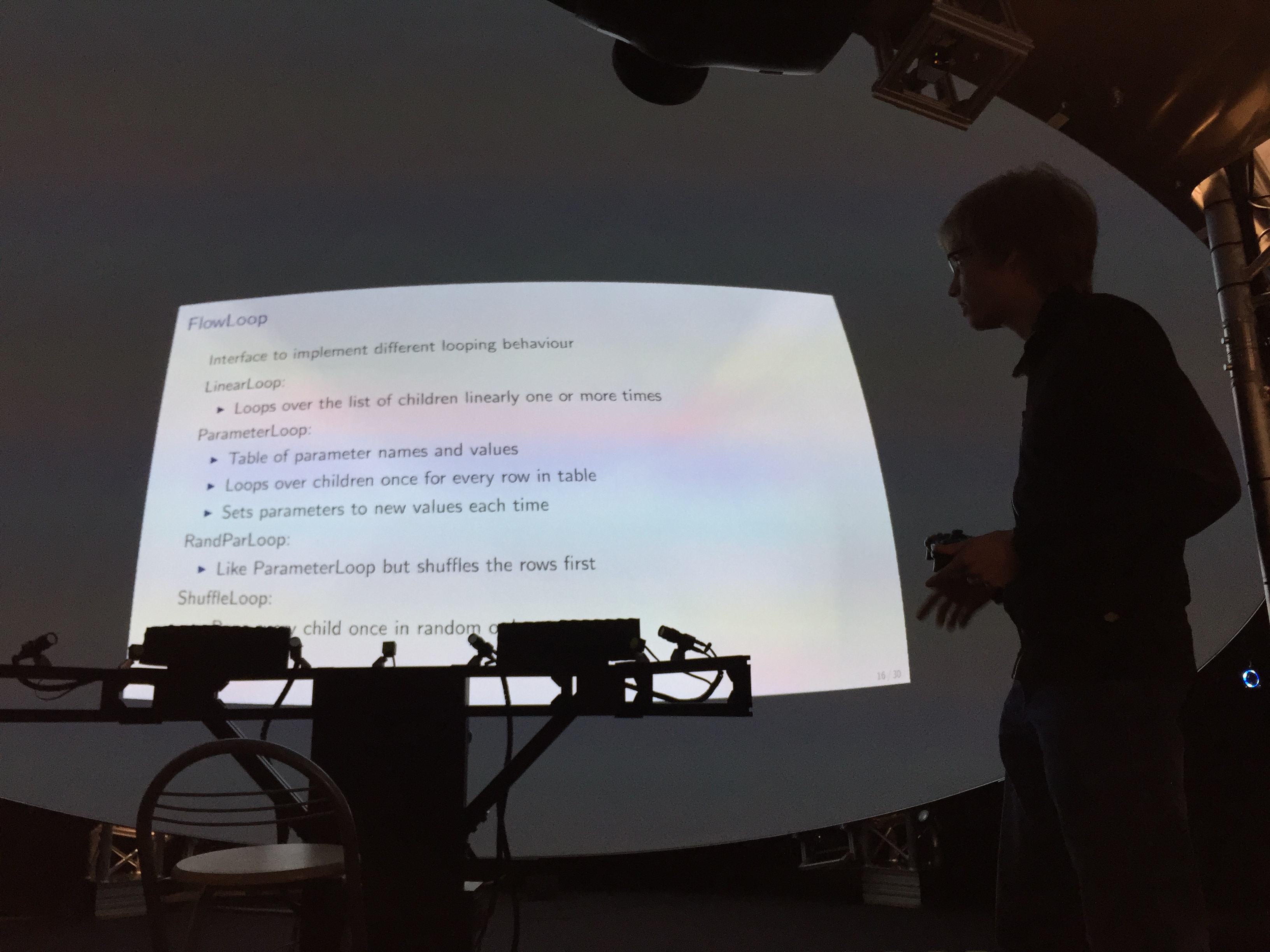 For man-machine interaction it is crucial to develop models of humans that look and move indistinguishably from real humans. Such virtual humans will be key for application areas such as computer vision, medicine and psychology, virtual and augmented reality and special effects in movies.

Currently, digital models typically lack realistic soft tissue and clothing dynamics or require time-consuming manual editing of physical simulation parameters. Our hypothesis is that better and more realistic models of humans and clothing can be learned directly from real measurements coming from 4D scans, images and depth and inertial sensors. We combine statistical machine learning techniques and physics based simulation to create realistic models from data.

I will give an overview of several of our projects in which we build realistic models of human pose and shape, soft-tissue dynamics and clothing. I will also present a recent technique we have developed to capture human movement from only 6 inertial sensors attached at the body limbs. This will enable capturing human motion of every day activities, for example while we are interacting with other people, while we are riding a bike or driving a car. Such recorded motions will be key to learn models that replicate human behaviour. I will conclude the talk outlining the next challenges to build virtual humans that are indistinguishable from real people.

Gerard Pons-Moll obtained his degree in superior Telecommunications Engineering from the Technical University of Catalonia (UPC) in 2008. From 2007 to 2008 he was at Northeastern University in Boston USA with a fellowship from the Vodafone foundation conducting research on medical image analysis. He received his Ph.D. degree (with distinction) from the Leibniz University of Hannover in 2014. In 2012 he was a visiting researcher at the vision group at the University of Toronto. In 2012 he also worked as intern at the computer vision group at Microsoft Research Cambridge. From 11/2013 until 11/2015 he was a postdoc at the Max Planck Institute (MPI) for Intelligent Systems in Tuebingen, Germany. Since 11/2015 he is a research scientist at the MPI.

His work has been published in the major computer vision and computer graphics conferences and journals including Siggraph, Siggraph Asia, CVPR, ICCV, BMVC(Best Paper), Eurographics(Best Paper), IJCV and TPAMI. He serves regularly as a reviewer for TPAMI, IJCV, Siggraph, Siggraph Asia, CVPR, ICCV, ECCV, ACCV and others. He co-organized 3 tutorials at major conferences: 1 tutorial at ICCV 2011 on Looking at People: Model Based Pose Estimation, and 2 tutorials at ICCV 2015 and Siggraph 2016 on Modeling Human Bodies in Motion.

His research interests are 3D modeling of humans and clothing in motion and using machine learning and graphics models to solve vision problems.

Computer graphics, vision, and psychophysics form a scientific triad whose interdisciplinary research is about to fundamentally change the way we drive our cars, watch movies, play games, communicate with one another and computers, socially interact, learn, live. In six distinguished lectures, some of the most renowned scientists worldwide in these fields will share their view on what has already been accomplished, which challenges still lie ahead, and what we may expect in the future. The symposium is intended to bring together all scientific communities interested in visual computing and perception, to stir everyone's imagination, and to foster exciting new research between graphics, vision, and perception. (SVCP'17 web page)

Symposium The Entanglement between Gesture, Media and Politics

Image are projections of the physical reality around us: any luminous or illuminated object continuously emits images of itself, in all directions and over huge distances. At the speed of light images convey a wealth of information about their origins, which our visual system deciphers almost without effort, in real time, extremely efficient, and enormously robust. Consequently, our visual sense has evolved to become the prime modality for gathering information of our environs. In my talk I will present a few ongoing projects to investigate how we perceive visual information and make use of perception to attain visual authenticity in computer graphics.

Invited talk at the University of Konstanz/SFB TRR 161 (abstract)